The Mothership touches down in Oakland 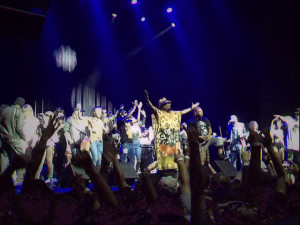 For 2 nights, September 15th and 16th, George Clinton and Parliament Funkadelic played the east bay at the Fox Theater in Oakland. His presence allowed many old and new fans the chance to visit Funkalelica and join in on his party with other Funkateers as they performed ‘One Nation Under a Groove’. Uncle Jam officially joined the Brainfeeder records ranks opening for electronic and hip hop legend Flying Lotus aka. Captain Murphy. Flying Lotus is also known for incorporating projection mapping onstage with the assistance of Strangeloop and Timeboy, his visual designers weave 3D images throughout the concert creating a visual impact that virtually. Another Brainfeeder artist performing was Thundercat, who works with Flying Lotus and released the song ‘Them changes’, a song that had all of us singing along last year and in Thursday’s concert too. Early sets by Shabazz Palaces and Gaslamp Killer, the qwirky dj who bobbed around like Animal from the Muppets, and had alot of folks bobbing too. 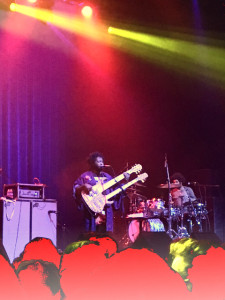 Although the entire night was really quite amazing, my personal favorite parts of night took place when Thundercat played. He performed the hit, along with the opening two songs ‘Hard Times’ and  ‘Song for the Dead’ from his 2105 EP ‘The Beyond/Where Giants Roam’ and ‘The Lotus and the Jondy’ from his 2013 ‘Apocolypse’ release. ‘The Lotus and the Jondy’ is a song written about the late pianist Austin Peralta and Flying Lotus. The former Suicidal Tendencies bass player has shown how varied his talents are as his new musical recordings show much more influence to 70’s fusion jazz such as Weather Report than to the thrash metal he became know for during his days with S.T. For people who haven’t heard this incredible new direction from Stephen Bruner, is as prolific when working on his own music as he is when he’s working with Kendrick Lamar and Flying Lotus and other Brainfeeder artists. 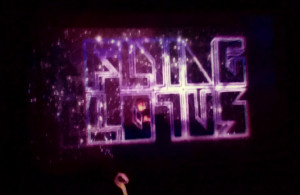 Steven FlyLo Ellison has really been turning alot of heads since the release of his 2012 recording ‘Until the quiet comes’ and the title song short film that won the Sundance Film Festival’s Short film special jury award in 2013. FlyLo’s music and visual design on many media fronts take us to other worlds and often times other dimensions as one of his most utilized stage media is a tesseract. The soundscapes are often eerie and macabre, at times even telling violent or futuristic tales where mutations and electronic beats flow like Tim Burton and Danny Elfman recreated into one person. Ellison performs with a long list of who’s who also including Kendrick Lamar and Kamasi Washington. Kendrick Lamar’s vocals were present in the closer of the night ‘Never going to catch me now’. Ellison’s alter ego Captain Murphy made an appearance on Dead Man’s Tetris, a song also from the 2014 realease ‘You’re Dead’. FlyLo also gave the audience a glimpse of the upcoming Thundercat song and it was one of the highlights of his set, bringing us back from the rapid fire beats and visuals like returning to one’s sense after a dream or psychedelic experience. 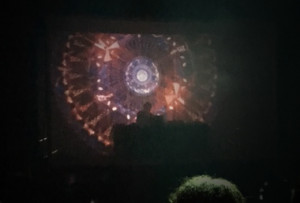 While Dr. Funkenstein himself may have not headlined the event, George Clinton really did the most with the audience of anyone on stage that night. Parliament Funkadelic concerts are typically greater than 2 hours with an extended group and performance that includes Sir Nose D’voidoffunk and no Funkadelic concert would be complete without Starchild’s anthem ‘Flashlight’ in which Sir Nose is hit with the bop gun and starts to dance. Last year, Clinton released the memoir, ‘Brothers be, Yo like George, ain’t that funkin’ kinda hard on you?’ The book coincided with a song bearing the latter half of the phrase by Funkadelic that finishes the title with ‘I was hard when I started and I’ll be hard when I get through.’ The song features Kendrick Lamar with Ice Cube. With the time constraints of having so many artists one song that was noticeably absent from the set of recent years was ‘Maggot Brain’, but maybe the switched it up night two and added it back in. The crowd favorite ‘Atomic Dog’ was certainly not overlooked and it was clear that was one of strongest songs of the night for N. Carolina born Clinton and P-Funk. Concerts by the undisputed Godfather of Funk meld a multitude of hits from over the years and Thursday included the 1975 hit ‘Get off your ass and jam’ as incentive to the crowd to dance. 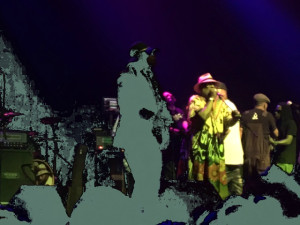 George Clinton takes it to the stage at the Fox

Opening acts Shabazz Palaces and Gaslamp Killer had the crowd grooving early at the start of the show. Shabazz Palaces combine hip hop with the Kalimba and add some loops to this chill vibe. The Gaslamp Killer is a dj with some really far out records to spin and invite you in. With all of those acts performing on the same stage, they made us aware that ‘There ain’t no party like a P-Funk party cause a P-Funk party don’t stop!”