Rainford Hugh Perry goes by many names such as The Upsetter, Pipecock Jackson, and Lee “King” Perry but most of those in the world of Dub know him as Lee “Scratch” Perry. Scratch, the living legend, has an illustrious history as both the creator of Dub as well as having been the famous producer who helped Bob Marley and the Wailers craft their authentic sound when Reggae emerged from the roots of Ska and Rocksteady from the 50’s and 60’s in Jamaica.

Perry’s studio was the infamous Black Ark where some of the greatest names in Reggae and Dub performed such as Max Romeo, Junior Murvin, the Heptones and the Wailers. Scratch’s studio band was referred to as “The Upsetters” and were the session musicians for many of these legendary recordings.  It was in the Black Ark where Perry recorded what many consider the first Dub recording in 1976 on Perry’s own Upsetter record label, Super Ape. Super Ape was released internationally on Island records later in the same year. The use of reverb on percussion was key in creating the impression of a different plane in which the rhythm bounced and shook as if in some sort of vacuum.

Perry also implemented a variety of sounds that were samples of recordings simulating exhaust, bubbling laboratory experiments and other mind expanding sound effects to give his music an otherworldly element.

Blessed also with an eccentric flair for the strange, Scratch has a wardrobe that gives him the aura of a mystic. On Friday, September 4th, the founder of Dub proved he had more energy than anyone in Santa Cruz including his collaborators, Subatomic Sound System, a band from Brooklyn who help pull of the performance of Super Ape in it’s entirety. The 79 year old icon performed for well over 2 hours endlessly streaming together his quirky rhyming lyrics that are characteristic of his signature sound. 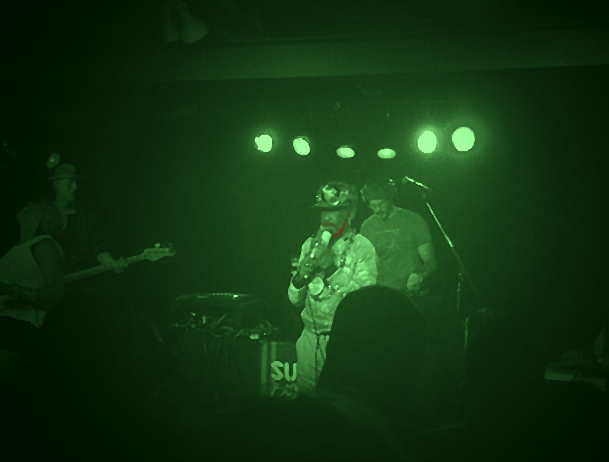 Pipecock Jackson with Subatomic at Moe’ Alley in Santa Cruz

Perry’s legacy doesn’t stop as the creator of Dub. In the 80’s Scratch continued to develop his futuristic and Dub sound for the space age while working with On-U Sound producer Adrian Sherwood. The team worked together originally with The Dub Syndicate. In 1990 Perry teamed with The Dub Syndicate to record From the Secret Laboratory. The collaborations between Perry and Sherwood have continued (though infrequent) and are another important component of The Upsetter’s amazing career. Perry and Co. performed the song Inspector Gadget from the aforementioned Secret Laboratory release in Friday’s performance.

After moving to Switzerland, Perry teamed up with 1/2 of the electronic group Yello on the 1997 release Technomajikal on Reachout Interntional Records (ROIR). Other notable collaborators includes a longstanding collaboration with Mad Professor as well as with Bill Lswell aon the 2011 release Rise Again. Released on M.O.D. Technologies, the recording features Perry’s rhyming dub poetry over the musical stylings of a Reggae inspired grouping of Laswell’s group Material, with many recognizable associates from his Axiom and Celluloid record label days.